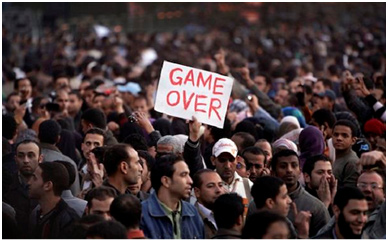 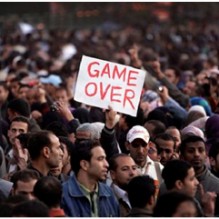 Game over, maybe. A new one beginning, definitely.

What has happened in the Arab world in the 18 months since the demonstrations that began in December of 2010 has changed the course of political history in Tunisia, Egyptian, Lybia and Yemen. One question that has been asked ever since Arab Spring, is what’s the new game, who are the players and who’s rules ?

In each of these countries where the rulers have been deposed, social media has been a catalyst for creating that change. The euphoria and the sense of possibility created by the citizen protests, also referred to as the ‘Arab uprisings’, continued in the months after the Arab Springs in countries across the Arab world, in particular across the top of Africa. But has the Arab citizen movement’s promised permanent shift to democracy, even in countries where dictators have been deposed, stalled and if so why?

A new London School of Economics report that suggests it has, concludes new elites are emerging out of the ashes of the revolution, with ties to old regimes (LSE). The report, After the Arab Spring: Power Shift in the Middle East?, looked for evidence of genuine power shifts in the region but found:

“little evidence to suggest that future historians will rank the events of 2011 with those of 1848 or 1989. Simply too few of the fundamentals of social, economic and political organisation in the Arab world have been successfully contested by the protests.”

The report suggests that part of the reason for this is that Middle East states have tended to use networks of favourites to govern: spreading wealth and power to a favoured few creates the type of allegiances that so often result in loyalties used to prop up dictatorships by

‘members of the ruling elite (who) flaunted their wealth in the streets of Tunis and Cairo, as standards of living for the majority of the population stagnated.’

Mugabe in Zimbabwe also used this tactic when he took good farming land from white farmers, on the basis that he was going to give that land to needy locals and ‘my’ war veterans. In Mugabe’s case his cronyism led to the destruction of the Zimbabwean economy.

The report suggests that in the Arab world, where four dictators have been driven from power, the crucial questions at the center of these changes are as much economic, as they are political. Once the dictator has been overthrown, how do we create a new more egalitarian world?

After all is said and done only two of the many Arab states who revolted or are in a state of current protest, Egypt and Tunisia, are now transitioning to a more representative form of government. The rest of the countries of the Middle East, as Geoff Lawson notes, retain the ruling elites they had before the Arab Spring started proving that successful revolutions are very rare indeed.

While there was a collective sense of endeavor during the uprisings, is it still the case? How do we unite the public who believe they have fought a good fight and won the right to choose a future? How do we mange this expectation in the midst of the social division that still exists?

Social media played its part in showcasing the level of protest and sending images of the Arab riots to the world. Can we now use social media as the basis of a less marginalised communications sphere in the Arab world? Will we find an answer in the arbitrary and reactionary nature of social media, or do we seek new possibilities from other ‘real citizen journalism’ practices? We need a more long-term view. Not only ‘citizen witnessing’, but a more proactive approach where infrastructure and training is designed to provide sustainable communication strategies where citizens can continue to publish their ideas about their country’s future to a world forum.

Notes from: After the Arab Spring: Power shift in the Middle East? (London School of Economics)

How do the new ruling elites set about reorganising the economy to meet the unfulfilled aspirations of their populations?

In Tunisia for example, Fatima El-Issawi writes that the success of organising elections has not secured a democratic future:

“Tunisia needs to bring about a radical change of practice that will prevent the development of new client networks serving new rulers but serving the corrupt model of Ben Ali’s regime.”

One of the biggest problem areas in Tunisia is the public service, where a culture of privilege still flourishes. There are few signs that the new ruling elite is departing from these practices.”

In Libya, where the rebels who overthrew the Gaddafi regime were a disparate alliance of factions, there is the same risk that patronage and favouritism will prevail, believes Ranj Alaaldin. The National Transitional Council has little centralized authority over the country while Islamist groups hold considerable sway. Elections due in June:

“could essentially transplant the existing circles of power and influence, in particular those of the Islamists.”

In countries where unpopular regimes have clung to power the report suggests they are unlikely to be dislodged soon. Christopher Phillips’ analysis of Syria, for example, finds that a combination of elite support for the Assad regime, foreign nervousness about intervention and a lack of mass demonstrations of the kind seen in Tunisia is likely to lead only to bloody stalemate. Other authors examining Iran and Bahrain are similarly pessimistic about the prospects for revolutionary change.

Indeed George Lawson argues that so far the Arab uprisings have not been revolutions in the historic sense at all since people have been demanding a voice in government rather than complete social change. He writes:

“The meaning and character of revolution itself has changed, becoming increasingly oriented around political representation rather than the reordering of society. As such, revolutions have become deliberately self-limiting, seeking to restrain revolutionary excess within constitutional limits.”

Greetings! I’ve been following your weblog for a long time now and finally got the bravery to go ahead and give you a shout out from Austin Texas! Just wanted to tell you keep up the excellent job!

I truly enjoyed reading it. Waiting for some more great stuff like this from you in the coming days.

Thanks, glad you’re aboard.

will check it out, tks

I just want to say I am just new to blogs and certainly loved your blog. Likely I’m going to bookmark your blog post . You definitely have outstanding articles. Many thanks for sharing with us your webpage.

Hi there, I am getting a large number of students that can’t access the internet. When they log on and open IE they don’t get the default web page or a log in screen. It appears to be random, I have tried setting up new user accounts but this also appeasrs to be hit and miss on whether they get access.

orgreenic
Many thanks for the article, it was interesting and compelling. I discovered my way here through Google, I’ll return one more time

Mmmm interesting So why don’t you help the﻿ Palestinians agniast Zionists in the same way?As based upon logic reason and common sense if France USA UK are agniast violence upon innocent people, as they claim, and are motivated by this reason then why are they not assisting other Freedom fighters in other countries agniast more violent dictators than Assad eg. Nethanyahu.? Something is wrong The masses are not as dumb as you think and they will respond appropriately.