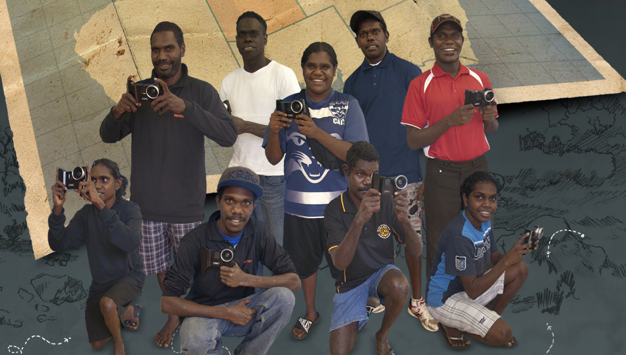 The above delivery models, based on hub systems that generally relied on people working with infrastructures to access technology, media training and deliver content. While acknowledging  the great advantages of hub based production models, the current NT Mojo project is designed to complement existing infrastructures, while providing mobile technology and associated media skills at an individual level.

The innovative NT Mojo mobile journalism (mojo) project developed by Burum Media, is helping create a local citizen voice by giving Indigenous Australian’s the opportunity to tell their own stories from a very different perspective – their own.

This affordable and portable technology enables mobile journalists (mojo’s) from six remote Indigenous communities in the Northern territory, to work at a local level to create and publish their own stories. This opportunity may create a key to a new level of media awareness and control, within remote Indigenous Australia.

Ivo Burum, together with trainers from the project partner, Batchelor Institute of Indigenous Education (BIITE), travelled through a number of communities to identify potential mojos. “There was a strong interest in the NT Mojo concept with 15 candidates turning up in one community to hear about the project”.  Supported by community based government representatives, mojos and a support person from each community were selected after consultation with community elders, who embraced the opportunity for their young people to tell their own stories.

Following a selection process, 11 mojo participants and support people flew to Darwin to take part in a training workshop designed by Ivo and held at the BIITE campus in Batchelor. The workshop included basic journalism skills, training on the use of the iPhone and the 1st Video edit App .

The mojos returned to their communities and began planning and filming their stories. Ivo together with BIITE trainers, Nicole Ostini and Helen Browning, travelled throughout the communities during the filming block to continue training and assist with various aspects of planning, filming and editing.

The NT Mojo stories cover a range of topics chosen by the mojos, with a particular focus on local initiatives designed to build strong communities:  anti petrol sniffing, night patrol, aged care, bush medicine and youth pathways, are just a few of the important areas mojos are exploring. Mojos are also telling personal stories about their communities. Stories about art, sport, music, tourism and significant cultural areas, feature in their early work.

The NT Mojo project is the first of two Burum Media mojo concepts,  the second is planned in a high school in inner city Melbourne for May.

The NT Mojo Website was produced by Gregory Holmes, Online Communication Manager and his skilled team at FaHCSIA, with early concept brief supllied by Hamish Mackellar.

Lynda McCaffery the Head of Media at BIITE coordinated their involvement. While Sharon Pangquee production managed the project.

The Iphone 4 is an Apple product and the Ist Video App was designed and supported by the team at Vericorder Technology.